In her time using Square Inc. as a payments processor, Stephanie Rubio’s digital-marketing agency had never had a customer challenge a card transaction.

So the May 14 email came as quite a surprise. Rubio was told that, beginning in seven days, 20% of the payments her SoVerve Marketing Group received through Square would be held as a reserve against any future disputes. The money wouldn’t be available for four months.

“I wasn’t expecting that at all,” Rubio said. “I get this email in the middle of Covid. It threw me for a loop because I’m already having to make drastic pivots in my business.”

The world’s biggest payment companies have grown increasingly worried about a surge in disputed card transactions at retailers, especially as the coronavirus pandemic stifles economic activity. The pain is particularly acute among smaller “mom and pop” shops that get by on thin margins in the best of times and are often unaccustomed to dealing with demands for chargebacks on purchases.

“You’ve had merchants that weren’t in the dispute game all that much needing to understand these rules,” said Colleen Taylor, head of merchant services at Wells Fargo & Co., which has also begun requesting additional reserves. “If we see they’re experiencing the ‘double whammy’ as we call it of reduced charge volume and increased chargebacks and refunds, we’re reaching out.”

As travel refunds have abated, other industries have begun to see spikes 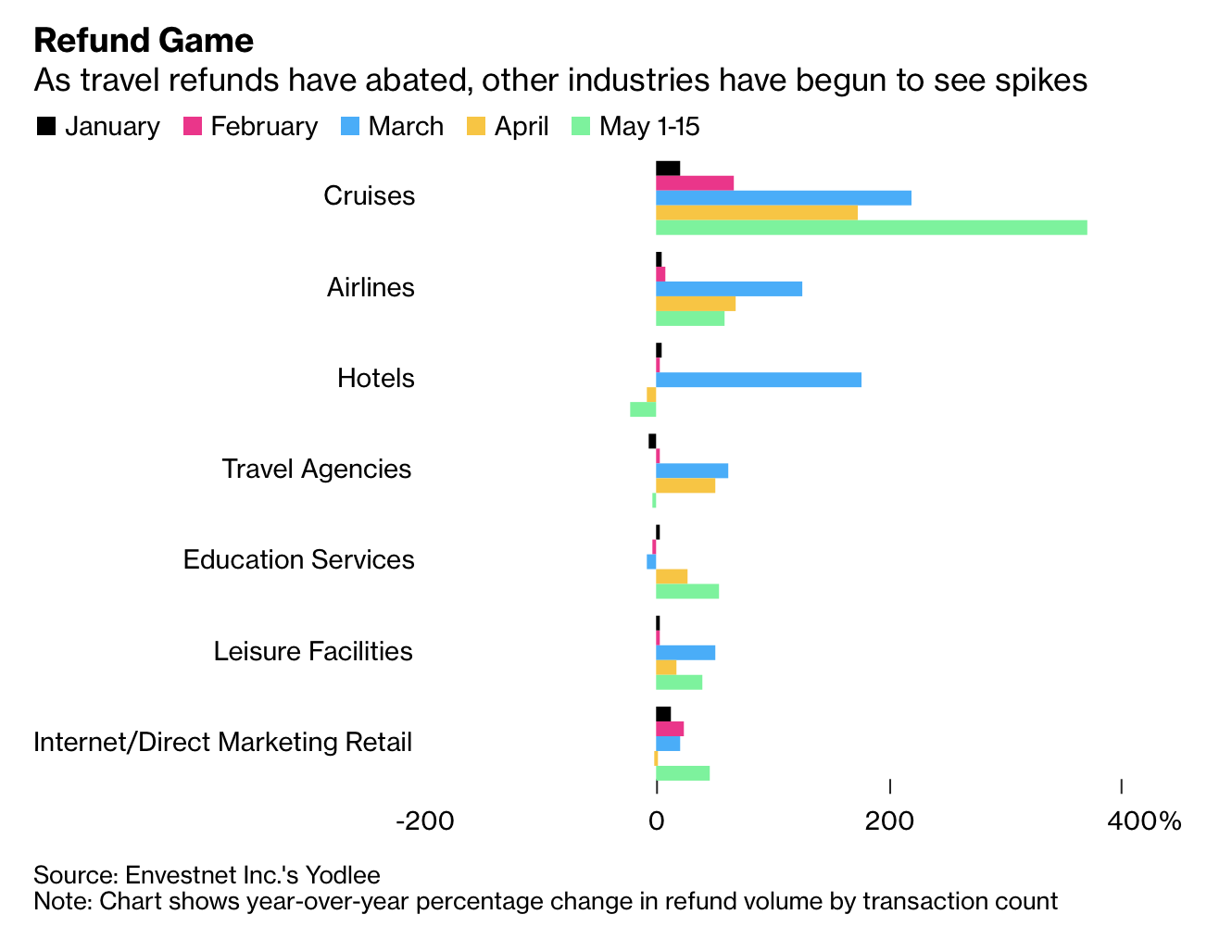 Transactions for more than $7.5 billion of goods were disputed in 2019, according to the consultancy Aite Group. And now consumers are flocking to banks to dispute charges, often for purchases of trips or concerts that were canceled. As the pandemic worsened, chargebacks climbed by about 25% compared with a year ago, according to Chargebacks911, which helps retailers manage disputes.

“A lot of these retailers don’t even know how to address chargebacks and now they’re hit with thousands,” said Monica Eaton-Cardone, chief operating officer of Chargebacks911.

Rubio’s SoVerve was among a wave of businesses affected by Square’s actions in recent weeks. Starting in late March, the company created reserve requirements for certain sellers, including those who collect payments in advance or those with a high rate of customer disputes.

“Like most payment processors, we may use reserves to enable riskier businesses to continue processing payments through Square while ensuring these sellers are able to cover issues like disputes, refunds, or outstanding fees without running a negative balance on their accounts,” Square said in an emailed statement. It said fewer than 1% of its sellers have reserves.

Processors like Square and dozens of other firms help retailers handle billions of card transactions every year, taking a fee each time a card is swiped. The role is typically that of a profitable middleman, but can carry risk. While it usually falls to the merchant to resolve a disputed transaction, if that business goes under, the payment processor is left to make sure the consumer is made whole.

That’s why firms have begun requiring retailers to increase reserves, which act as a rainy-day fund. Some merchants, including Rubio, say they haven’t seen an increase in chargebacks but are already facing higher reserve requirements.

The reserve will “protect you and Square from unexpected loss events,” Square said in an email to another customer, which was used as an exhibit in a lawsuit filed against the company over the practice in May. “We realize this is a challenging time for many business owners and we remain committed to supporting you.” Square declined to discuss the suit.

For retailers, it’s not just canceled plans that are causing the increase in card disputes. The pandemic prompted a massive shift to online commerce -- which is more prone to fraud -- as businesses across the country remain shuttered and consumers look for no-contact ways to buy goods.

That means some of the surge stems from a quirk in the rules set by payment networks like Visa Inc. and Mastercard Inc. Merchants can avoid being liable for in-store purchases by upgrading point-of-sale systems to accept chip cards. No similar mechanism exists for online purchases.

“Small merchants, as they’ve scrambled to make sure they can be relevant in this new normal for all of us, they’re also now bringing on the liability for those transactions,” said Nicole Jass, a senior vice president at Fidelity National Information Services Inc.

The world’s biggest payments companies often say the ability to dispute a transaction is a key reason consumers are comfortable using electronic payments. Banks in recent years have sought to streamline the dispute process, and it can take just a few clicks to charge-back a purchase.

Those moves rankled retailers, who can be charged a fee of as much as $50 every time they face a dispute. And merchants contend they’re seeing something known as “friendly fraud,” in which consumers dispute legitimate purchases rather than return goods for a refund.

“Friendly fraud is hard to quantify, given that the genuine consumer has conducted the transaction and is subsequently disputing it,” Aite Group said in a report last month that showed 16% of consumers admitted to perpetrating such fraud.

In response to the pandemic, Visa implemented a monitoring program to help reduce the volume of invalid disputes. American Express is extending the amount of time merchants have to respond to a dispute to 30 days.

“For many businesses, it’s the first time they’re experiencing this,” said Max Neukirchen, head of merchant services at JPMorgan Chase & Co. “And we want to help them on their journey. A lot of these changes will stick even after we reach some form of normal again.”